Union City, Tenn. –During their celebration of David Crockett’s 235th birthday on Saturday, Discovery Park of America in Union City, Tenn., announced a project to restore a dozen structures in the museum and heritage park’s Settlement. When complete, the project that is being funded by the Robert E. and Jenny D. Kirkland Foundation will cost more than $500,000 and will take nearly a year.

The collection of hand-hewn log buildings resembles what one might have found in a mid-nineteenth century frontier settlement shortly after Crockett settled in the area. The Settlement is on the North Lake at Discovery Park and includes farmhouses, a corn crib, tool barn, smokehouse, hog barn, loom house, doctor’s cabin, livestock barn and woodshed.

All the buildings were generously donated to Discovery Park by families from around the region and were moved to the Settlement before Discovery Park opened in 2013. While great care was taken when they were moved and put back together on the 50-acre heritage park at the time, work is now being done to ensure they will remain in the best possible shape for decades to come.

Leatherwood, Inc. was selected to handle the cabin conservation for the park.

“We felt Leatherwood’s understanding of historic processes and architecture and their experience restoring similar structures made them an obvious choice for this project,” said Jennifer Wildes, senior director of exhibits for Discovery Park. “Their extensive resume includes
numerous presidential homes, national landmarks and monuments, private house museums as well as a long list of private historic residences.”

Leatherwood’s team will replace select logs that have decayed, patch damaged areas that could worsen over time, stabilize cabins that have shifted and waterproof all structures. All the issues will be addressed using traditional practices, including no screws, nails or dowels in the notches.

Leatherwood Inc. was founded in 1981 by Vic Hood to fill a void he saw in the construction and restoration field. As a graduate student at the University of Tennessee, he gained experience in documenting and recording historic structures. He later conducted building research for various state and federal agencies, including the National Park Service, the Atomic Energy Commission, the Tennessee Valley Authority and the U.S. Army Corps of Engineers. Hood developed a unique method of analyzing and addressing the needs of historic structures using modern technology.

“This is a wonderful collection of original cabins,” said Hood. “We’re taking great care to make certain the Settlement is here for Discovery Park’s guests to enjoy and learn from decades into the future.” 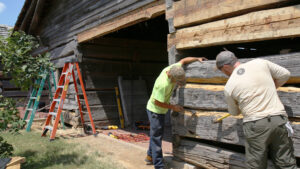 Photo Caption: Winston King and John Spiva with Leatherwood, Inc. replacing logs as a part of the cabin conservation in the Settlement at Discovery Park of America.