Union City, Tenn. – Discovery Park of America has announced details for a celebration of the 235th birthday of David Crockett on Sat., Aug. 14, 2021. The folk hero, frontiersman, politician and Tennessee settler made his home in Northwest Tennessee from 1822 until he departed for the Alamo in 1835.

The celebration is sponsored by Dixie Gun Works and residents of all 21 counties in West Tennessee will enjoy free admission.

Discovery Park CEO, Scott Williams, has released a book about Crockett, “The Accidental Fame and Lack of Fortune of West Tennessee’s David Crockett.” He will be hosting a panel discussion that day with guests Broadway actor Bart Shatto and educator Arthur W. Hunt III, Ph.D.

Shatto is a member of the original Broadway casts of Tony-nominated “Hands on a Hardbody” and “The Civil War.” He has also been seen on Broadway in ‘War Paint,” in the iconic role of Jean Valjean in “Les Miserables” and he originated the role of Quincey Morris in “Dracula.” Shatto and a team are currently working on a new play, “Davy Crockett: In Concert,” that takes place in Memphis the night before he departs for Texas. Shatto will also be performing at Discovery Park of Aug. 14.

Dr. Hunt is professor of Mass Media and Strategic Communication at the University of Tennessee at Martin where he teaches public speaking related courses. For three years, he performed a living history program for Tennessee state parks, schools and other venues called, “The Story of Davy Crockett as told by Himself.”

Throughout the day, guests will be able to experience Crockett and learn more about his contribution to West Tennessee with panel discussions, performances and activities taking place throughout the museum and park.

Crockett, known for his marksmanship, was one of the earliest non-Native American hunters around nearby Reelfoot Lake. A passionate advocate for the earliest settlers of West Tennessee, he served in state legislature from 1821 to 1824, then as congressman representing West Tennessee counties in the United States House of Representatives from 1827 to 1831 and 1833 to 1835. He represented settlers making their homes in the counties of Carroll, Dyer, Fayette, Gibson, Hardeman, Hardin, Haywood, Henderson, Henry, Lawrence, Madison, McNairy, Obion, Perry, Shelby, Tipton, Wayne and Weakley.

Residents of all the counties listed, along with Benton, Chester, Crockett, Decatur, Lake and Lauderdale that were formed later, will receive free admission on Sat., Aug. 14 with a valid Tennessee driver’s license or other form of identification noting a residence in one of the listed counties.

“David Crockett’s 235th birthday provides a great opportunity for us to spotlight his relationship with West Tennessee and his impact on popular culture of his day. He was both literally and symbolically a ‘common man,’ and that role grew more important as governing the country shifted away the educated eastern elites to regular working-class Americans,” said Scott Williams. “He also blazed a trail representing an exciting, new type of American that thrilled early media and entertainment consumers. He made them excited about what could be found down the river or just over the next mountain, and that popularity resulted in a level of fame not yet experienced by anyone else at that time.”

Other presentations will take place throughout the day on a variety of topics relating to Crockett and his life and career in Tennessee. There will also be craftspeople demonstrating work done during that period and opportunities to learn more about the wildlife of Northwest Tennessee during the time Crockett lived here.

Visitors will find many ways to experience David Crockett at Discovery Park all year long. Included is a statue dedicated to the frontiersman, a congressional exhibit in Liberty Hall at Freedom Square, a reproduction of Crockett’s portrait by John Gadsby Chapman, the Regional History Gallery telling the story of Northwest Tennessee, a 20,000-gallon aquarium and tanks featuring the wildlife of Reelfoot Lake, a one-of-a-kind Earthquake Simulator, the Native American Gallery, an 1800s Tennessee log cabin community, Mill Ridge featuring a working gristmill and forge and more.

To make the celebration even sweeter, Sabin’s Café at Discovery Park is giving a free mini cupcake to the first 235 guests who request one in honor of Crockett’s 235th birthday.

Craftspeople – Weaving, woodworking, wickerwork and other demonstrations in the 1800s Settlement and Mill Ridge.

Wildlife – Experience the wildlife of Northwest Tennessee at the touch table in the Regional History Gallery.

Nathaniel Newlin will explore the history of the political boundaries of the local, regional and federal jurisdictions that have existed within West Tennessee over time and how the 21 counties west of the Tennessee River came to embody the political and cultural distinctions of the Grand Division.

More than ships passing in the night, Sam Houston and David Crockett share a bond of historical congruence that cannot be understated. In this program, Nathaniel Newlin will explore the movement that brought both Houston and Crockett to Texas and how their legacies diverged into refined aristocrat and rowdy folk legend, respectively.

Focusing on the medically purposed plants found in the Heritage Garden, Zach Rea will elucidate antiquated methods of treating illness and injury in the 19th century.

Join Aquarium and Wildlife Manager Corbin Ekberg in the Trapper’s Cabin to explore how animal habitats and distributions have changed since the days of Crockett, as well as the hunting and husbandry practices that epitomized the 19th century frontier.

For complete details and the most up-to-date list of activities for David Crockett’s 235th Birthday Celebration, visit Discovery Park’s online calendar of events. 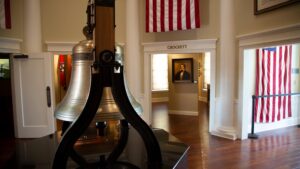 Photo Caption: The exhibit on the life and career of David Crockett at Discovery Park includes more about his time in West Tennessee. 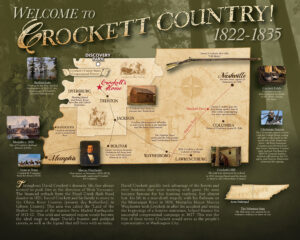 Photo Caption: One of the panels from the exhibit about David Crockett’s life and career on display at Discovery Park. Crockett made West Tennessee his home from 1822 until he left for Texas in 1835.