Union City, Tenn. – On Wed., July 21, 2021, Discovery Park of America will open a new temporary exhibit, “40 CHANCES: Finding Hope in a Hungry World: The Photography of Howard G. Buffett” in the ATA Traveling Exhibit Hall. The exhibit is free with park admission or membership.

Philanthropist and photographer Howard G. Buffett turned his camera lens on global hunger and poverty with this exhibit of photographs. Traveling to 137 countries over the past two decades, Buffett has documented the powerful forces that keep poverty and hunger alive as part of a global campaign to raise awareness of these issues. Buffett believes that each of us has about 40 chances to accomplish our life goals, just as farmers have about 40 growing seasons to improve their harvests. The photographs in “40 CHANCES” reflect his belief that hunger is intertwined with poverty, fear, war and conflict, and lack of opportunity for women.

“Howard G. Buffett’s photographs give faces to the statistics of nearly 800 million people around the world who live with chronic hunger,” said Scott Williams, president and CEO of Discovery Park. “We hope that visitors will walk away from the exhibit reminded of the need for innovation in agriculture to help solve problems like chronic hunger.”

Also included is an interactive kiosk that highlights several organizations working to make a difference around the world, from Feeding America — the nation’s largest domestic hunger relief organization — to the U.N.’s World Food Program. For more of the story behind the exhibit, guests will enjoy a video of Buffett discussing his work and his campaign to end world hunger.

On Dec. 5 of last year, Discovery Park opened a new permanent exhibit on agriculture called “AgriCulture: Innovating for Our Survival” in the Simmons Bank Ag Center and will be introducing a new pollinator garden tour this fall. Museum officials felt this exhibit of photographs by Buffet was another way to bring attention to the importance of agriculture around the world.

For a complete schedule of exhibits, events and all the details you need to plan your visit, go to DiscoveryParkofAmerica.com. 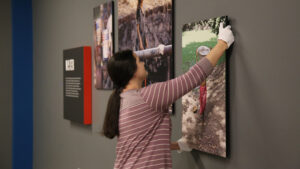