“The beauty of the First Amendment is that it’s yours, it’s not anybody else’s,” said Bret Baier, host of Special Report with Bret Baier on the Fox News Channel. “There’s a lot of power in knowing that you can determine your own future based on that.”

During the festival, The Gatlin Brothers, performed some of their biggest hits including “All the Gold in California,” “Night Time Magic” and “Broken Lady.”

On Friday, groups of students grades five through twelve and college students from the University of Tennessee at Martin experienced a day of fun and interactive activities on the topic of the First Amendment. They were led by members of the Freedom Forum team who traveled to Union City from Washington, D.C. where the organization is headquartered.

Also on Friday, Gene Policinski, Senior Fellow for the First Amendment for the Freedom Forum spoke at the Union City Rotary. Policinski, a journalist and a founding editor of USA Today, writes, lectures and is interviewed regularly on news media and First Amendment issues. He noted, “It gives me hope that we have not changed those 45 words of the First Amendment since 1791. I think the middle is growing — the group that just wants to sit down and talk this out.”

About the Freedom Forum

The Freedom Forum’s mission is to foster First Amendment freedoms for all. It works to raise awareness of First Amendment freedoms through education, advocacy and action, sharing the stories of Americans who have exercised their rights to ignite change. Established July 4, 1991, by founder Al Neuharth, the Freedom Forum is a nonpartisan 501 (c)(3) foundation that advances First Amendment freedoms through initiatives that include Today’s Front Pages, the Free Expression Awards, the Power Shift Project, the annual Al Neuharth Free Spirit and Journalism Conference, the Chips Quinn Scholars and the Al Neuharth Award for Excellence in the Media. In addition to its Washington, D.C. headquarters, it has locations at the Al Neuharth Media Center at the University of South Dakota; the Overby Center for Southern Journalism and Politics at the University of Mississippi; and the John Seigenthaler Center at Vanderbilt University.

About Discovery Park of America

The mission of Discovery Park of America, a premier world-class museum and heritage park located in Union City, Tennessee, is to inspire children and adults to see beyond. Included is a 100,000-square-foot museum featuring 9 interactive exhibit galleries with additional space for temporary exhibits from around the world and a 50-acre heritage park. Discovery Park of America is a 501 (c)(3) public charity funded by generous individuals, corporations and foundations including its principal funder, the Robert E. and Jenny D. Kirkland Foundation. For more information, visit DiscoveryParkofAmerica.com, Facebook, Instagram and Twitter. 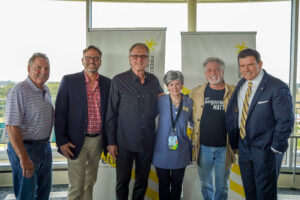