Never-before-seen Exhibit of Rare Collection of Globes and Maps Opens at Discovery Park on Dec. 2, 2021

Union City, Tenn. –Discovery Park of America released details today about the upcoming temporary exhibit premiering at the museum and heritage park that will shine a spotlight on one of the most unique collections of globes and maps in the world. “The Fascinating World of Murray Hudson’s Globes and Maps” will be on display in the museum’s ATA Traveling Exhibit Hall Dec. 2, 2021-March 1, 2022.

“The Fascinating World of Murray Hudson’s Globes and Maps” is sponsored by Conley and Conley Attorneys at Law.

Hudson is a former English professor, stockbroker and farmer originally from Dyersburg, Tenn., who owns the largest private collection of for-sale antiquarian maps, globes, books and prints in the world. The spark of inspiration for his collection came from visiting an antique map shop on High Street in London while taking a summer course at Oxford University in 1964. His collection today includes more than 17,000 maps and more than 700 globes of various ages, sizes and designs. Many can be found in his shop, Murray Hudson – Antique Maps, Globes, Books & Prints, in the former Halls, Tenn., Post Office at 109 Church Street, where he also sells vintage sheet music and antique posters.

“Because ‘discovery’ is even in the name, I’ve always thought Discovery Park would be the perfect place for an exhibit of some of my collection,” said Hudson.

The team at Discovery Park that undertook the task of creating an exhibit from Hudson’s collection found it challenging to narrow down the items that will appear in the exhibit. “Each time we visited Halls and explored this collection with Murray, we likened the experience to stepping into Harry Potter’s Hogwarts School or a magical wizard’s lair,” said Jennifer Wildes, the museum’s senior director of exhibits and collections. “There was so much there we wanted to share with our guests, but only so much room. We selected the items that we thought were the most interesting and that tell the story of the physical history of the world as we knew it, starting as early as the 1500s.”

One extremely rare item that will be on display when the exhibit opens on Dec. 2 is the very first edition of the first atlas of America, printed in 1795, which houses 21 maps. Another early map features Rome as it existed in 1595 and includes hand-written notes made by Abraham Ortelius, the father of modern cartography, the practice of drawing maps.

Those exploring the exhibit will also get to see rare globes that range from the two-and-a-half-foot wide diplomat’s globe from 1918 that focuses on political geography to one of the smaller curiosities in his collection, an 1840s boxed globe from Germany that shows Texas as an independent republic, just before it was annexed by the United States.

One globe that will be on display has personal significance for Hudson. Painted on a gourd, it includes a scene from “The Wizard of Oz.” Hudson’s late wife, Bonnie Hudson, was a great-granddaughter of L. Frank Baum, author of the famous children’s book series that was later adapted for the classic 1939 film.

When asked if the collection will include any treasure maps, Hudson replies that in his collection, “the globes and maps are the treasure.”

“The Fascinating World of Murray Hudson’s Globes and Maps” will be on display in the museum’s ATA Traveling Exhibit Hall Dec. 2, 2021-May 15, 2022 and is free with admission or membership. 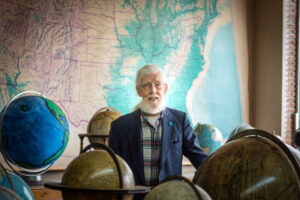 Photo Caption: Murry Hudson is a former English professor, stockbroker and farmer who has amassed the largest private collection of for-sale antiquarian maps, globes, books and prints in the world. Some of his collection will be on display at Discovery Park of American in Union City, Tenn., Dec. 2, 2021-March 1, 2022.