‘Once Upon a Pumpkin’ at Discovery Park to Feature an Enchanted World of Fairy Tales Made from Pumpkins, Hay Bales and Fall Flowers

Already under construction are sections featuring the stories of “The Three Little Pigs,” “Jack and the Beanstalk,” “Goldilocks and the Three Bears” and other classic children’s stories.

Another popular activity returning for this year’s event is the Pumpkin Maze.

“Of course, we love keeping Discovery Park looking beautiful all year round, but Pumpkin Village is a fun opportunity for us to get really creative,” said John Watkins, Discovery Park’s director of grounds and landscaping. “My team has been really excited about this year’s theme, and I think they’ve taken it to a whole new level.”

Discovery Park’s pumpkins have been grown by Nanney Farms Pumpkin Patch in Sharon, Tenn. Featured will be many varieties of pumpkins including Jack-O-Lantern, Cannonball, mini pumpkins and an assortment of other specialty pumpkins and gourds. 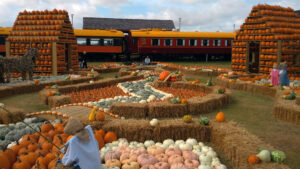 Photo Caption: A past Pumpkin Village at Discovery Park of America