Union City, Tenn. – Discovery Park of America announced even more military vehicles, the U.S. Navy “Nimitz” Virtual Reality Experience and a never-before-seen exhibit have been added to the 2022 Military History and Armed Forces Symposium. In addition to the rare appearance of a Black Hawk helicopter, guests will be able to experience an M113 armored personnel carrier, Oshkosh M1070 tank transporter tractor unit and more. The 360-degree virtual reality “Nimitz” provides a view of what it’s like to be on a Special Warfare Combatant-Craft crewmen mission in America’s Navy. The Nimitz will be open to visitors 14 and older. All participants must register either onsite or online prior to the event. Guests 17 and younger will need to present a waiver completed by a parent/legal guardian or have completed online registration in advance request a link by emailing education@discoveryparkofamerica.com.

Those with an interest in Civil War-era photos will appreciate “A Country Divided: Photos from the Civil War,” an exhibit of rare Civil War photos and artifacts that is making its world debut at the event and will be on display through May 25, 2022.

Designed by Discovery Park’s collections and exhibits team featuring items from the collection of Jason Pate, it consists of several early photography examples depicting soldiers that either lived in or traveled through Obion County and the surrounding Tennessee/Kentucky region during the Civil War. Guests will learn of the main photography mediums used during this time (ambrotypes, tintypes and cartes de visite) and of the soldiers’ stories that have survived along with their 160-year-old photographic counterparts on display.

Jason Pate, an award-winning educator currently employed with Obion County Schools, is an avid collector and “caretaker” of Civil War history. Using his nationally published collection, Pate has told, and brought to life, the stories of hundreds of Civil War soldiers from both sides of the war.

The popular Lantern Walk returns now representing stories and voices from the Civil War-era from a multitude of perspectives. The members-only reception will feature entertainment provided by Operation Song and an early-American folk dance with live music and dance instruction provided by the 52nd Regimental String Band. The band will also be performing during a church service held on Sunday morning. Friday’s events have been designed with students in mind and will provide both military- and history-related content perfect for school groups.

All the programs, panel discussions and other events during the symposium are included with park admission or membership. Tickets to the Lantern Walk, members-only reception and an early-American folk dance are free but limited and must be reserved at discoveryparkofamerica.com/event/military.

All active military, veterans, their guests and student groups receive free admission all three days of the event. Group leaders wanting to request scholarships for student groups should email Sheridan Wells at education@discoveryparkofamerica.com or call 731-599-1132.

For a full list of events and biographies on the special guests, visit discoveryparkofamerica.com/event/military. 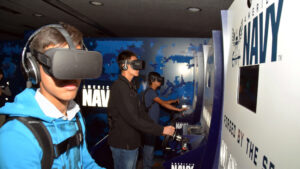 Photo Caption: The U.S. Navy “Nimitz” Virtual Reality Experience will be on display during the Military History and Armed Forces Symposium 2022. 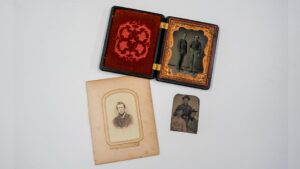 Photo Caption: Images from the Civil War-era using an ambrotype, tintype, and carte de visite as the photography mediums.