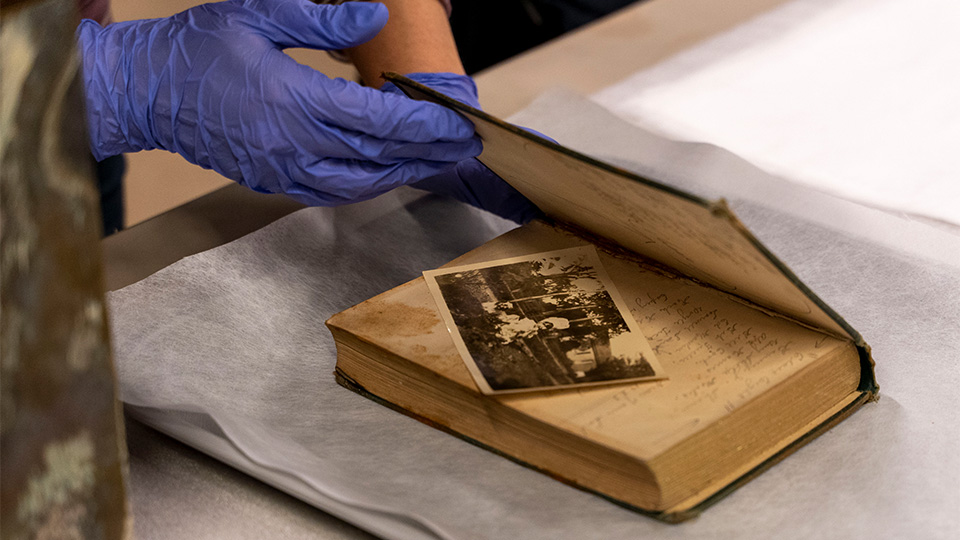 Union City, Tenn. —Discovery Park of America will exhibit all 24 artifacts found inside a cornerstone box from the historic Dresden First United Methodist Church. The exhibit, “Inside the Cornerstone Box,” will feature the items that were found on Feb. 2, 2022, when Discovery Park artifact experts opened the box as many church members watched.

The box had been discovered during the demolition of the church that was damaged beyond repair in December 2021, during one of the worst outbreaks of tornadoes ever recorded in the United States. It was found bricked inside a part of the church that was dedicated in 1924 and was previously unknown to many of today’s church members. Once discovered, demolition halted as those on hand began work to carefully extract the box from behind the building’s cornerstone. Wayne McCreight, a church trustee, contacted Discovery Park to ask for help safely extracting the contents of this gripping find.

“Of all the artifacts we discovered, the most meaningful for me was a typed letter from the church’s pastor at the time, S. L. Jewell,” said Wildes. “It included a short history of the church, and he noted that the letter had been ‘hastily written for information of someone who may in coming years look in the box.’”

The majority of the items were well preserved with the most unexpected item being an ear of corn. A letter wrapped around the ear noted it was of the Little Willice variety and was placed in the box by R. E. Ellis, the Weakley County agriculture agent. Ellis wrote, “May God’s richest blessings be with each farmer and those that depend on farmers as long as good old Weakley County continues to be populated with people.” Other items that will be on display include newspapers, hymnals and historic church documents. These items will be seen by the public for the first time in 100 years.

Since removing the items from the cornerstone box, the Discovery Park collections team has been hard at work conserving the materials and safely preparing them for viewing. “Paper documents had been folded inside the box for a century, so they needed to undergo a humidification, drying, and flattening process before being placed on display,” said Jennifer Wildes, Discovery Park’s senior director of collections and exhibits. “A small amount of mold had to also be removed from certain hymnals—a result of moisture produced by the ear of corn as it desiccated over the years inside the box.”

“We feel honored that the Dresden First United Methodist Church allowed Discovery Park to be a part of this special discovery and for trusting us to retrieve, care for and display their cornerstone box items,” said Scott Williams, the museum’s president and CEO. “I know many of our guests will be as excited to see these items as I am.”

“Inside the Cornerstone Box” will be at Discovery Park Jan. 21 to May 21, 2023 and is free with admission or membership.

To plan a trip to Discovery Park, visit DiscoveryParkofAmerica.com. 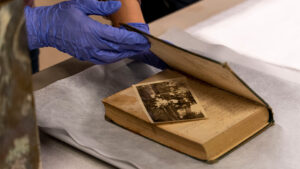 Photo Caption: A photograph of 2-year-old Norma Leone Lewis was discovered inside a hymnal that was removed from the cornerstone box. 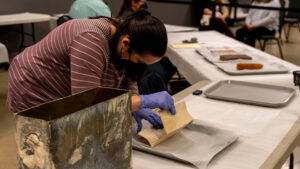