Union City, Tenn., Firefighters Invite Other Rescue Workers to Memorial Stair Climb at Discovery Park on the 20th Anniversary of the 9/11 Terrorist Attacks

Union City, Tenn. –Local Union City firefighters will once again be partnering with Discovery Park of America to host the annual stair climb on Sat., Sept. 11, 2021, as a way to pay tribute to those who were lost in the terrorist attacks on Sept. 11, 2001. Because this year marks the 20th anniversary of the attack, organizers anticipate a large number of firefighters, police, EMS and military personnel from throughout the region to join them at the Union City, Tenn., museum and heritage park.

Discovery Park also recently announced that for the month of September, the museum will be hosting a temporary exhibit, “September 11, 2001: The Day That Changed the World.”

The tower stair climb, held in conjunction with The National Fallen Firefighters Foundation, is open to any rescue worker who wishes to participate in climbing the Discovery Park Tower staircase 10 times in full gear, the equivalent of the 110 stories of the World Trade Center. The terrorist attacks killed 2,184 civilians, 343 firefighters, 72 law enforcement officers and 10 EMS workers. Many others have died from medical complications in the years since.

“Many of us who witnessed the tragic 9/11 terrorist attacks also remember the way we came together as a nation afterward,” said Fire Chief Karl Ullrich of the Union City Fire Department. “We are grateful to have the opportunity to come together again to honor the fallen heroes and raise critical funds for the NFFF.”

The mission of the NFFF is to honor and remember America’s fallen fire heroes, to provide resources to assist their families in rebuilding their lives and work within the Fire Service Community to reduce firefighter deaths and injuries.

Those who have purchased a ticket to Discovery Park that day are welcome to watch and encourage the firefighters as they climb the stairs. Once the last firefighter has completed the climb, there will be a moment of silence to remember those who lost their lives.

Climbers will be given an identification tag and photo of a first responder that lost their life on 9/11 as they climb the steps, and the stairwell will be filled with posters and words of encouragement from Union City and Obion County students.

The immediate families of participating firefighters will enjoy free admission to Discovery Park. Firefighters will receive a voucher for a meal at one of the museum and park’s restaurants.

The opening ceremony will begin at 9 a.m. and will feature the Presentation of the Colors, National Anthem and an opening prayer. The climb will begin at 10 a.m. Registration is now open. For more information, to register, to sponsor a rescue worker or team or to participate as a sponsor, visit the event’s landing page or contact Lt. Rick Stacks at rdstacks73@gmail.com or call (731) 885-2232.

The temporary exhibit, “September 11, 2001: The Day That Changed the World,” recounts the events of September 11, 2001, through the personal stories of those who witnessed and survived the attacks. Told across 14 posters, this exhibition includes archival photographs and images of artifacts from the 9/11 Memorial & Museum’s permanent collection. It will be on display through the month of Sept. 2021. 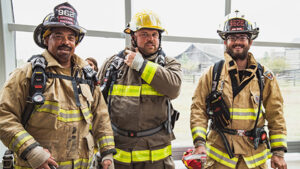