Discovery Park is making a big difference in countless lives, and this could not happen without individuals and organizations who support the mission with their time, talents and financial support.

Discovery Park of America provides a one-of-a-kind, transformational experience first envisioned by Robert and Jenny Kirkland. The location was chosen as a way for them to give back to Union City, their small West Tennessee hometown.

When Robert Kirkland held his first public meeting to explore the creation of a museum in Union City, more than 250 members of the community showed up to declare their desire to be part of his mission to create a center of culture and education in West Tennessee. Eventually, more than 350 volunteers contributed more than 20,000 hours to the planning and construction of Discovery Park.

The combined efforts of experts, novices and volunteers were fully realized on Nov. 1, 2013 as Robert and Jenny Kirkland cut the red ribbon. The public was impressed from the start. Not only had there never been anything like this in Obion County, there had never been anything quite like Discovery Park in the world.

Although Robert and Jenny Kirkland have both since passed away, their vision has been realized, and since opening, millions of guests have experienced this 100-million-dollar masterpiece now sitting in what was once a quiet cornfield. 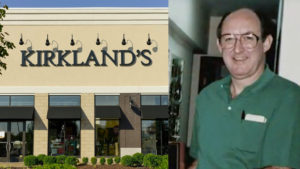 Robert Kirkland began his business with a rented office on First Street in Union City, Tennessee. For a desk, he had an old door set atop a pair of sawhorses. Whatever he may have lacked in furniture, Kirkland more than made up for in determination, inquisitiveness and work ethic. He grew his business and made his fortune in home décor, first in retail, then in imports. His career allowed him to travel the world, exposing Kirkland to sights, sounds and ideas that many live a lifetime without ever experiencing. As his business and fortune continued to grow, Kirkland and his wife, Jenny, committed themselves again and again to supporting their community in powerful ways. Today, Discovery Park of America stands not just as a life-changing gift to West Tennessee, but to the entire world.

Explore more when you purchase the Discovery Park of America Guidebook on Amazon.

From here, you can find out more about our mission, meet our team, listen to and subscribe to our podcast or read our blog.