Children 17 and Younger to be Offered Free Admission to Discovery Park of America in Jan. 2020 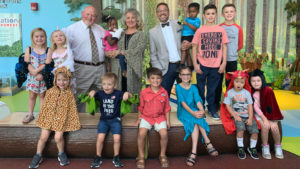 Union City, Tenn.— Discovery Park of America and Magnolia Place Assisted Living announced today that Magnolia Place will pay for Discovery Park of America admission for all children 17 and younger as a way to pay tribute to and memorialize Jenny Kirkland. Kirkland, who died in Aug. 2019, was married to the museum and park’s founder, Robert Kirkland and has continued to play an active role in the organization since his death in 2015.

“Education was one of the biggest passions for Robert and Jenny Kirkland,” said David Johnson, administrator of Magnolia Place. “Our board saw this as a way we could honor Mrs. Kirkland while helping even more young people have an opportunity to visit the museum and park she and her family founded.”

Throughout the month of Jan. 2020 children 17 and under will receive free general admission to Discovery Park at the ticket counter or as part of a student group.

Jenny Kirkland was active in the Arts Council of Union City and was a long-time member of St. James’ Episcopal Church where she served faithfully on the Alter Guild. Along with her husband, she established the Robert E. & Jenny D. Kirkland Foundation, where she served as President until her death.

She also served on the Board of Directors of Discovery Park of America and Promethean Foundation and was a founding contributor to the Union City Rotary Club’s European Trip for local high school students.

“Our mission here is to inspire children and adults to see beyond, and I am certain there will be many young people from around the region who will get to visit and whose lives will be changed thanks to this generous gift,” said Scott Williams, president and CEO of Discovery Park.

Tickets will be available at the Discovery Park of America ticket counter Jan. 2 – Jan. 31, 2020. Student groups must be arranged in advance by calling 731-885-5455 or emailing reservations@discoveryparkofamerica.com.