Union City, Tenn. – Discovery Park of America is hosting a three-day event April 23-25, 2021, featuring a variety of programs and interactive activities that explore the past, present and future of the American military. All active military and veterans will receive free admission to Discovery Park during all three days of this event.

Lt. Gen. Castellaw is a 36-year veteran of the U.S. Marine Corps, where he held several commands and served as the Chief of Staff for the United States Central Command during the Iraq War. Since retiring, Castellaw has remained active in advocating for a strong national defense and is an expert on climate security. He lives in Alamo, Tenn., and is the founder and CEO of FarmSpace Systems, a company specializing in drone and aviation technology in agriculture.

“Having Lt. Gen. Castellaw as our keynote speaker for the symposium is very exciting,” said Scott Williams, president and CEO of Discovery Park. “His knowledge, experience and expertise in climate change, drone aviation and military security is impressive, and I know our guests are going to be in for a treat when they hear him speak on Sun., April 25 at 2 p.m.”

In recognition of the 50th anniversary of the Vietnam War and National Vietnam Veterans’ Day, Cynthia Kent, author of “Better Men: Alpha Upsilon in Vietnam,” will host a panel on Sat., April 24 at 2 p.m. It will include veterans whose experiences she describes in her book.

On display just for this event will be a pop-up exhibit featuring military photographs by photographer Matthew Brady. Often referred to as the father of photojournalism, he is well known by many for his documentation of the Civil War. He photographed thousands of images including battlefields, camp life and portraits of Abraham Lincoln, Robert E. Lee and some of the most famous leaders of his time.

“For guests passionate about history and the military, this symposium is going to provide a lot to discover,” said Nathaniel Newlin, assistant education director and lead member in planning the symposium. “Our education and exhibits team has put together three days that are packed with incredible activities highlighting our country’s military past, present and future.”

All of the programs, panel discussions and other events during the symposium are included with park admission or membership. All active military and veterans receive free admission all three days of the event.

For a full list of events and biographies on the special guests, visit discoveryparkofamerica.com/militaryhistory. 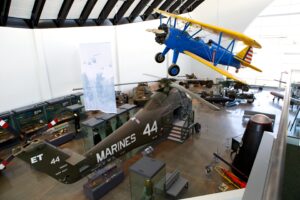 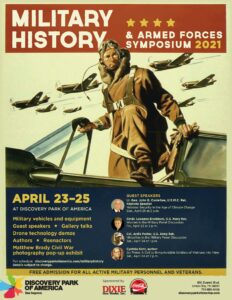