Union City, Tenn. – Discovery Park of America has announced several ways the museum and heritage park in Union City, Tenn. will be joining in the commemoration of the 100th anniversary of women’s suffrage. Included will be a trio of temporary pop-up exhibits, an online panel discussion and a production performed by students from Discovery Park’s Historical Theater Academy.

As noted by Paula Casey, publisher of The Perfect 36: Tennessee Delivers Woman Suffrage and the guest on an episode of Discovery Park’s podcast, “Reelfoot Forward, A West Tennessee Podcast,” Tennessee played a pivotal role in the passage of the 19th Amendment. On August 18, 1920, Tennessee became the 36th state to ratify the amendment, ensuring that the right to vote could not be denied based on sex. “This is our opportunity to tell the world that Tennessee was the state that made it possible,” says Casey on the podcast episode.

Beginning Fri., Aug. 14, 2020, guests to Discovery Park will be able to discover more about the history of women’s suffrage in Tennessee with a pop-up exhibit, “To Make Our Voices Heard, Tennessee Women’s Fight for the Vote,” from the Tennessee State Library and Archives and the Tennessee State Museum. Rich with interesting stories and images, the exhibit explores the ideas and actions of generations of Tennessee suffragists from across the state.

Also on display beginning on Aug 14., will be a pop-up exhibit of posters, “Votes for Women: A Portrait of Persistence” from the Smithsonian Institution.

“This exhibit of ten posters explores women’s political activism, the racism that challenged universal suffrage and the ratification of the 19th Amendment,” said Jennifer Wildes, Discovery Park’s exhibits director. “Not just a look back, it also addresses the suffrage movement’s relevance to current voting rights issues across America.”

The third of three exhibits Discovery Park will be launching on Aug. 14 is “Rightfully Hers,” a pop-up display from The National Archives in partnership with the Women’s Suffrage Centennial Commission. This exhibit contains images of documents, artifacts and photos that explore the sometimes complex history of the 19th Amendment’s ratification, women’s voting rights before and after the amendment passed and the impact that can still be felt today.

To kick off these three exhibits, Scott Williams, Discovery Park’s president and CEO, will host a free online panel discussion, “Tennessee Women, Society and Suffrage,” about the role of women in Tennessee’s history, including the 19th Amendment, at 10 a.m. on Thurs., Aug 13. Guests include Dr. Renee LaFleur, associate professor of history and director of the Center for Women and Gender Equality at the University of Tennessee at Martin; Dr. Alice-Catherine Carls, the Tom Elam distinguished professor of history, also at UT Martin; and Dr. Minoa D. Uffelman with the history department at Austin Peay State University. Dr. LeFleur and Dr. Uffelman have contributed to an updated volume of the book “Tennessee Women in the Progressive Era: Toward the Public Sphere in the New South” tentatively titled “Public Women, Society, and Suffrage: Expanding the Narrative of Tennessee Progressivism” that will be published by the University of Tennessee Press in 2021. All three guests have researched and written about women’s activism during the Progressive Era. Reservations for the panel discussion can be made here.

Students participating in Discovery Park’s Historical Theater Academy will be taking some of the lessons learned from the exhibits, along with their own research, as they create a unique theatrical production based on this historic moment in time. The Historical Theater Academy is a unique program designed for students in grades 6-12 that takes place at Discovery Park twice each year. Academy participants receive instruction in multiple aspects of theater and historical research and then stage a performance of the original work they create. In addition to gaining experience in numerous disciplines including acting, set design, costuming, writing and historical research, students learn collaboration skills. Classes begin on Tues., Aug. 18, 2020 and are held on Tuesday evenings from 6 to 8 p.m. at Discovery Park, and they will be taught by instructors from Discovery Park and the Masquerade Theatre.  The performance will take place on Fri., Dec. 4 and Sat., Dec. 5, 2020 at the Capitol Theatre. The Historical Theater Academy is made possible through the support of Warner Law Firm and Third & Church of Union City

The exhibits will be on display through Dec. 31, 2020 and are free with museum admission or membership. The exhibits are sponsored by Baptist Memorial Hospital – Union City, Conley & Conley Law Firm and JD Distributors, Inc. 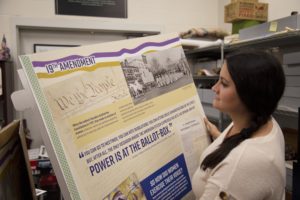 Photo caption: Director of exhibits Jennifer Wildes looking over a panel of one of the temporary exhibits on the 19th Amendment, which ensured women the right to vote. Tennessee was the deciding state to vote in favor of this amendment. A trio of exhibits will be on display Aug. 14 – Dec. 31, 2020.