Discovery Park of America Ends Annual Giving Campaign on Giving Tuesday with a $50,000 gift from Newell and Bettie Graham

Union City, Tenn. — Discovery Park of America is completing its inaugural giving campaign in a big way as local businessman and philanthropist, Newell Graham, and his wife, Bettie, donate $50,000 to the park. “Discovery Park is the best thing to happen in Union City in the past 50 or so years,” Graham said. “Bettie and I believe that if you are successful, it is important to give back to your community.”

In January 2020, Discovery Park launched its development program, had its first gala in March and kicked-off its giving campaign in August. Mike Cox got the giving campaign off to a good start with a gift of $50,000. “We are so appreciative to Mike and Newell for showing their support and helping us reach our goal in our inaugural giving campaign,” director of development Mary Nita Bondurant said. While the Kirkland Foundation continues to be the park’s largest supporter, both Cox and Graham have joined the ranks of sustaining donors and gained their place on the donor recognition wall inside the museum. “Discovery Park is a nonprofit public charity,” Bondurant explained.  “Ticket sales do not sustain us. We depend on support from generous people like Graham, Cox and so many others who have supported our mission with financial gifts throughout the year.” In addition to the gifts from Cox and Graham, the park has received donations of over $158,000 from individuals and the gala in 2020.

Newell Graham was born and raised in Union City. He left after high school to attend college at Ole Miss in Oxford, Miss., where he majored in history and minored in naval science. Graham met his wife Bettie at Ole Miss and they married their senior year. After graduation, the young couple traveled at home and abroad as Graham served 2 ½ years in the U.S. Navy. After spending a year on the USS Lexington in Pensacola, Fl., where they had their first son, Richard, the Grahams moved to Seoul, South Korea, and toured the countryside around Seoul. “We had a great time visiting museums and temples all around Seoul on my weekends off,” said Graham.

After completing his stint in the military, the Grahams moved home to Union City where Newell apprenticed at the local Coca-Cola bottling plant under his father, Hardy Graham. “Bettie wanted me to go to law school, but I figured I could work two years for my dad and take over the Coke plant and it might take me 20 years to make senior partner in a law firm,” Graham said. “I absolutely have no regrets.” The local plant has been in the Graham family for over 100 years, as Newell’s great uncle, Coca Cola Smith, founded it in 1909.

Graham said that he and Bettie started their charitable foundation around ten years ago. “I believe in paying it forward. The idea is that if you are successful, you should give back and do charitable work wherever you are,” Graham stated. “While on this earth, people need to do the best that they can for themselves, and for other people, as well.” The Grahams support other local charities and programs near and dear to their hearts including the St. James Episcopal Church, the Rifle Team and Equestrian Team at the University of Tennessee at Martin, a program at Ole Miss that provides tutors for students who need extra help, the local Chimes for Charity and other local fundraising efforts.  “We believe that if you have been blessed financially, you need to give something back to society.”

Graham said that he loves Discovery Park of America. He said that nationwide, an approximate 75% of the people have never seen a cow. “The reverse is true around here,” he stated. “If not for Discovery Park, many people in this rural region would never see a museum or experience all of the educational opportunities that the park offers.”

The Grahams are the parents of Richard and Stanford Graham. Richard is married to Anna Long Graham and they have four children. Stanford is deceased.

Graham says that his favorite part of Discovery Park is the Military Gallery, as he was Co-Chairman of that gallery and has been a military and gun enthusiast for over 60 years. A longtime friend of Robert Kirkland, Graham sold the land to Kirkland to build Discovery Park here in Union City. “I think Discovery Park is a great educational experience,” Graham said. “And, it sits right in the middle of my farm. That’s why we built two new hotels and a pavilion next door–we wanted to continue to support the park.”

CEO Scott Williams noted that the Grahams have been supporters of the park since it was just a dream of Robert Kirkland. “I’ve been told that Kirkland himself said that Newell sold him the land too cheap,” Williams shared. “Newell has served as Co-Chair of the Military Gallery, has been a faithful board member, invested in hotels right next door and has now become a sustaining donor.  We sincerely appreciate all that he has done and continues to do to support the park.”

The inaugural giving campaign ends on GivingTuesday, Dec. 1, 2020. However, the park accepts charitable donations all year long. Bondurant said her job in development consists of securing sponsors for the park’s annual events and managing all of the annual and charitable gifts, many in honor or memory of someone. To find out more about how you can support the park, visit www.discoveryparkofamerica.com/give. 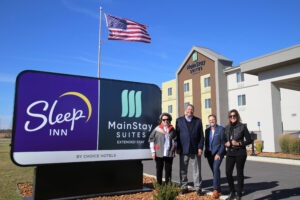