Union City, Tenn. – Discovery Park of America’s president and CEO, Scott Williams, will host a program on Zoom with author and Union City native Philip Jett on Wed., Feb. 24, from 12 to 1 p.m. They will be discussing Jett’s upcoming book, “Taking Mr. Exxon: The Kidnapping of an Oil Giant’s President,” scheduled to be released on May 1, 2021. The program is free to attend, but advanced registration is required by signing up online.

Jett’s book explores the mysterious 1992 disappearance of Sidney J. Reso, then president of Exxon International. After a van screeched to a stop at the end of his driveway while he was picking up the morning newspaper, a man wearing a ski mask and holding a .45-caliber pistol leaped from the van, grabbed Reso, shoved him into the back of the van and sped off. This sparked the largest kidnapping investigation in U.S. history since Patty Hearst’s abduction.

Jett is a retired corporate and tax attorney living in Nashville. He was born in Union City and graduated as valedictorian from Obion County Central High School. He received his bachelor’s, law and graduate law degrees at the University of Tennessee and the NYU School of Law in New York City.

Jett has represented multinational corporations, CEOs and celebrities from the music, television and sports industries. He has made court appearances, drafted federal legislation, lobbied Congress, wrote legal works on various subjects and spoken at numerous conferences and seminars. He is a member of various boards and organizations, including being a founding member of the Nashville Writers’ Council.

After his retirement from legal practice, Jett wrote his first nonfiction book, “The Death of an Heir: Adolph Coors III and the Murder That Rocked an American Brewing Dynasty,” which was named one of the best true crime stories of 2017 by The New York Times. His second book, “Taking Mr. Exxon: The Kidnapping of an Oil Giant’s President,” will be released on May 1, 2021, and is available for preorder at all major outlets, such as Amazon, Walmart, Barnes & Noble and Books-A-Million.

Jett has two sons, Austin and Brandon. His mother, Polly Jett, and sister, Paulette Jett, live in Union City. His brother, Perry Jett, lives in Newbern, Tennessee. When he is not speaking about his books, Jett often volunteers for children’s causes in the Nashville area. You may visit his website at philipjett.com. 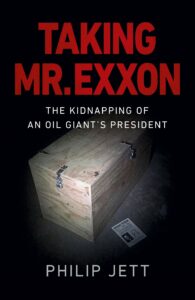