The Robert E. and Jenny D. Kirkland Discovery Awards to recognize individuals for their contributions in inspiring children and adults to see beyond.

Union City, Tenn.—Discovery Park of America has announced an annual award that will recognize individuals from West Tennessee whose work, like that of the museum and heritage park, brings enlightenment, awareness and education to those whose lives they’ve touched. 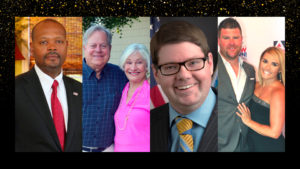 The inaugural award gala and fundraiser, to be held on March 7, 2020 will bring together thought leaders, policymakers, philanthropists and others to celebrate the winners, all of whom have deep roots in West Tennessee. The 2020 Robert E. and Jenny D. Kirkland Discovery Award winners are:

Kevin Coby is the President and CEO of SITEC Consulting, LLC in Maryland and a U.S. Air Force military intelligence veteran, having served over nine years. SITEC Consulting is Coby’s second technology company. SITEC specializes in the support of design, development and delivery of state-of-the-art technology solutions, systems engineering and management consulting services for customers ranging from the Department of Defense, Department of Homeland Security to various other intelligence agencies. A true philanthropist at heart, he has and continues to be a great supporter of large and small organizations, providing financial support, youth career training through technology, work-related opportunities and sponsoring education-related causes including support for the Boys & Girls Clubs of Northwest Tennessee-Union City.

Carl and Alice Kirkland call Jackson, Tenn. home and have contributed their time, talents and resources to numerous social causes and nonprofits including the Jackson Symphony Orchestra, the Humane Society of Jackson and the Alice and Carl Kirkland Cancer Center. Carl Kirkland, cousin to the late Robert Kirkland, began his career working at his family’s Union City clothing store. The cousins started a small chain of retail stores that soon grew into a much larger chain of home decor stores known as Kirkland’s. Carl reflects on what their friends would tell them, “The Kirkland family has business in their blood.”

Jon and Jaimie Robinson are active in numerous charities and causes and served as co-chairs of the 2018 JDRF Promise Gala. JDRF is the leading global organization funding type 1 diabetes (T1D) research. Jon Robinson is in his fourth season leading the Tennessee Titans, and in 2017 was promoted to executive vice president/general manager.

Stephen Vaden is General Counsel for the United States Department of Agriculture. As General Counsel, he serves as the department’s chief legal officer and oversees a team of 235 attorneys in 13 offices around the country. Those attorneys perform all legal work on behalf of the Department and its more than 100,000 employees. Vaden previously practiced law at the Washington, DC firms of Jones Day and Patton Boggs, where he counseled clients on a range of political law issues and represented parties before tribunals at all levels of the state and federal court systems. He is also passionate about educating young people about farming and agriculture. On Oct. 17, 2019, President Trump nominated Vaden to serve as a Judge on the United States Court of International Trade.

The Robert E. and Jenny D. Kirkland Discovery Awards Gala and Fundraiser will be held on Sat., March 7, 2020 with cocktails at 5:30 p.m. and an awards dinner at 7 p.m. Hosted by Badgett Playhouse Director Bill Minihan, the elegant event will feature a silent auction, live auction and entertainment.

For more information or to purchase sponsorships, tickets and tables, click here.

The mission of Discovery Park of America, a premier world-class museum and 50-acre heritage park located in Union City, Tennessee, is to inspire children and adults to see beyond. Included is a 100,000-square-foot museum featuring 9 interactive exhibit galleries with additional space for temporary exhibits from around the world and a 50-acre heritage park. Discovery Park of America is a 501(c)(3) public charity funded by generous individuals, corporations and foundations including its principal funder, the Robert E. and Jenny D. Kirkland Foundation. For more information, visit DiscoveryParkofAmerica.com, Facebook, Instagram and Twitter.