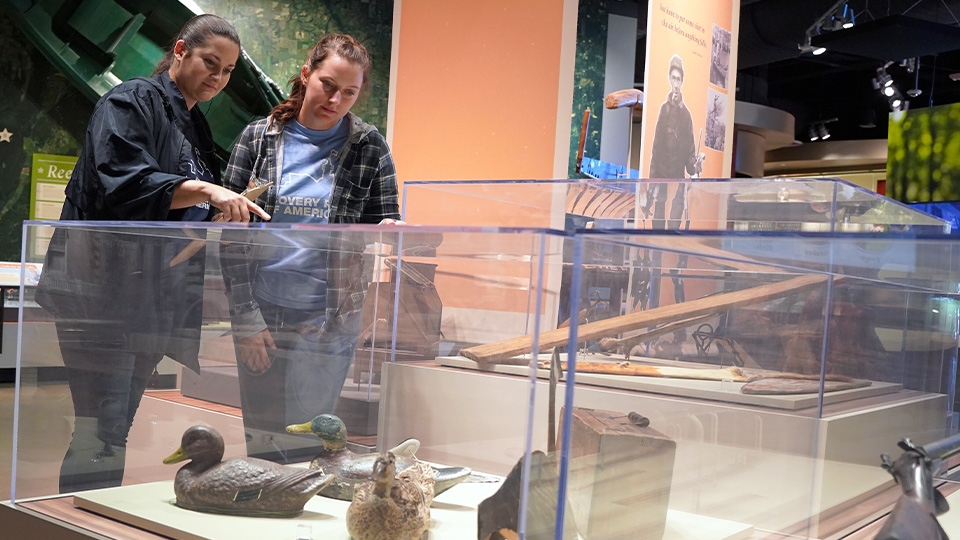 Union City, Tennessee —A pop-up exhibit on waterfowl of the Mississippi flyway produced by Discovery Park of America will be premiered at the 87th annual World’s Championship Duck Calling Contest and Wings Over the Prairie Festival that is held Thanksgiving weekend in Stuttgart, Arkansas.

The non-profit museum and heritage park, located in Union City, Tennessee, has created the one-of-a-kind pop-up exhibit to provide festival attendees with a small example of a larger permanent exhibit coming to Discovery Park in 2023, “Duck, Duck, Goose: Waterfowl of the Mississippi Flyway.” The pop-up exhibit will be located in the Commercial Exhibits Tent at the festival.

When opened at Discovery Park, the permanent exhibit will use a combination of stories, three-dimensional objects, interactive elements and hands-on experiences to tell the stories of waterfowl hunting and conservation. Ducks Unlimited, the world’s leader in wetlands and waterfowl conservation, is the premier sponsor of the exhibit. Other partners in the exhibit include Tennessee Wildlife Resources Agency, Five Oaks Lodge, Final Flight Outfitters, Inc., First Choice Farm and Lawn, U.S. Fish and Wildlife Service and the Robert E. and Jenny D. Kirkland Foundation. Additional partners will be announced soon.

Held every Thanksgiving Week, the Wings Over the Prairie Festival is the largest outdoor expo in the Mid-South promoting the sport of duck hunting.

“Because of our relationship with so many waterfowl hunters and conservationists, we were aware of the festival and its importance, and we decided this is the perfect year to attend,” said Scott Williams, president and CEO of Discovery Park. “We’ll have a whole team there sharing a sneak peek at the exhibit, looking for content to include and hoping to meet additional partners who would like to help us tell these stories to our visitors from around the world.”

Discovery Park is located in the heart of the Mississippi Alluvial Valley, an area that spreads from Cape Girardeau, Missouri, to New Orleans, Louisiana. It is the largest and longest of the flyways. Almost half of the waterfowl in North America use this area as a stopover during their annual migration. Also in the same area is historic Reelfoot Lake, a popular destination for hunters, fisherman and birdwatchers for decades. The lake was created after a series of earthquakes in 1811 and 1812 that sent the Mississippi River flowing into a large gash that had been opened by the earthquakes.

Anyone interested in more information about partnerships in this new permanent exhibit should contact Mary Nita Bondurant at mbondurant@discoveryparkofamerica.com or call 731-885-5455.