Union City, Tenn. – Discovery Park of America is working closely with the Tennessee Bluebird Society to install ten bluebird boxes throughout the 50-acre heritage park that will provide nesting sites for bluebirds. This initiative, along with others relating to wildlife and conservation, is being implemented as part of the new exhibit on farming innovation, “AgriCulture: Innovating for Our Survival.”

Active members of Discovery Park are being sought to help monitor the activity of the bluebirds once the boxes have been installed. Those who participate in the monitoring program will be required to check on the ten bluebird boxes and record the status at least three times during the monitoring season. Participants can choose their dates and can sign up as individuals, as a group or organization or as a family. Members must sign up to participate no later than Fri., March 5, 2021.

More information including what would be expected for Discovery Park members who volunteer and how to sign up is available at DiscoveryParkofAmerica.com/bluebirds.

Before settlers arrived in North America, the population of eastern bluebirds flourished. Bluebirds relied on holes they would find in trees to build their nests. However, when settlers began cutting down these trees for lumber, the bluebirds were forced to make their homes in other places. Some adapted and found holes in wooden fence posts, which solved the problem for a while. Then, with the introduction of metal posts, the bluebirds were yet again left without the natural places to make their nests. The population has steadily declined from the 1920s to today.

In 2013, the nonprofit Tennessee Bluebird Society was formed. Its mission is “to promote bluebird and other native cavity-nesting bird conservation.” The organization fulfills its mission by developing public awareness through programs and workshops, encouraging the development of nest boxes to collect data and providing social opportunities for members to share information on bluebird conservation and more.

The Cumberland County Bluebird Club and Discovery Park’s wildlife educators, Kayce Workman and Lindsey Prince, will install the ten boxes in early February. These nest boxes will be part of the outdoor experience for guests to enjoy when visiting Discovery Park’s 50 acres.

The list of other ways Discovery Park is contributing to educating guests on agriculture and conservation includes:

The link to watch the information video and the latest information can be found at DiscoveryParkofAmerica.com/bluebirds. For answers to any additional questions, email info@discoveryparkofamerica.com. 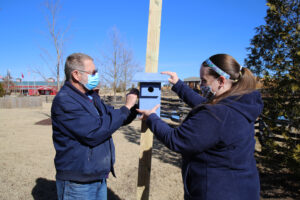 David Blincoe from Discovery Park’s maintenance department and Kayce Workman from the park’s wildlife department work together to find the right spot to place one of the ten bluebird boxes that will be installed around the 50-acre heritage park. The bluebird monitoring program is a new initiative to track data for bluebirds in the region.