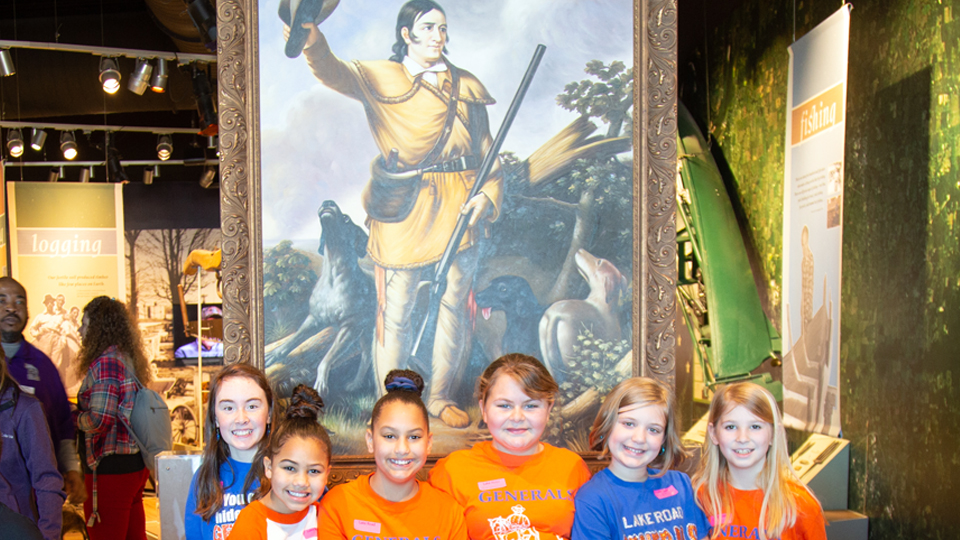 A group of young Discovery Park guests posing with a reproduction of a John Gadsby Chapman painting of David Crockett on display in the Regional History Gallery.

July 1, 2020 – On the shores of Discovery Park of America’s North Lake lies a quaint collection of nearly a dozen cabins devoted to preserving the culture and heritage of West Tennessee during the 19th century. From cooking to gardening, sewing, weaving, and even going to the doctor, almost every conceivable facet of life is addressed in the two-acre Settlement. Acting as the centerpiece of the conglomeration is a shimmering, larger-than-life statue of one of the most pivotal figures of this region during the early 19th century – David Crockett.

Originally hailing from Green County, Tennessee, Crockett found his way to West Tennessee in 1826 at the age of 39 after suffering a political defeat in his home district. He immediately assumed the congressional office for Tennessee’s 9th District, including Obion County, which had been organized just 4 years prior. Crockett last resided in nearby Rutherford, before leaving Tennessee for Texas in November 1835. Crockett infamously met his end fighting for Texan Independence the following March at the Alamo Mission in San Antonio.

“Davy” Crockett, as he is often misnamed in modern publications, is a figure shrouded in mystery and legend; this was the case during his life as well. Crockett presented himself as the people’s politician – a man in tune with the working class, the impoverished, and the plight of frontier families. This strategy earned him titles such as “king of the frontier,” and gave rise to the folk legend that most people recognize. It was not until 1954 that the popular image of “Davy Crockett” was donned with a coonskin cap by Walt Disney’s miniseries by that name. In reality, Crockett and all of his friends and acquaintances simply referred to him as David, a tradition preserved and respected in the museum and academic communities.

To enhance your visit to Discovery Park, the Explorer Plus package includes all-day access to the Trapper’s Cabin that features a fun nod to Crockett and other early West Tennessee trappers and hunters.