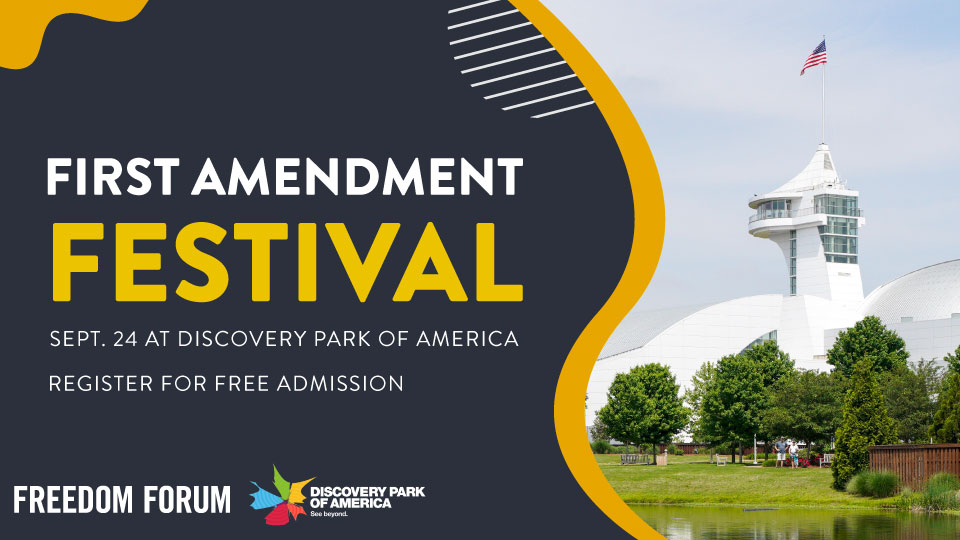 Being nonpartisan is really important to us. Everyone in this country has First Amendment freedoms, no matter who they are or what they believe.

Overwhelmingly, Americans see the First Amendment – which protects our essential freedoms of religion, speech, press, assembly and petition – as vital to our democracy. But people also express worry about free speech on college campuses, for instance, and threats to religious freedom. And many people are afraid to speak freely today for fear of consequences, both online and in-person.

We want to hear more from the people here, and we also want to celebrate these incredible freedoms that Americans uniquely enjoy. We are the only nation to have protected these essential freedoms in our founding documents. The only one!

We’re also marking First Amendment Day on Sept. 25, an opportunity for all of us to celebrate our most fundamental freedoms.

The First Amendment is the way we talk to each other as a nation. Sometimes we agree and oftentimes, we don’t. But we speak out, we publish news and opinions, we assemble in groups to talk and maybe protest and we petition the government for change. And of course, freedom of religion – often called the First Freedom – protects our consciences, it protects our deepest beliefs from government interference.

But why Tennessee? Tennessee has an incredible First Amendment history. It was the Tennessee legislature that finally made women’s right to vote a nationwide law in 1920.

And civil rights protesters in the 1960s in Nashville and other cities sat at lunch counters and rode buses to protest segregation. Those are just two examples of the power of the First Amendment: People assembled and petitioned the government to change. It didn’t come nearly quickly enough, but the First Amendment creates the space for our country to adjust and revise our laws and our treatment of each other.

Today, schools and parents are wrestling with the issue of book selection: Some parents and politicians are seeking to remove or restrict books in school libraries they consider inappropriate; other librarians, educators and other parents are arguing for access to those books.

On a lighter note, Tennessee was the home of Elvis Presley, and his hip-shaking free expression rocked and shocked Americans in the 1950s. People often don’t think about the First Amendment protecting your right to free expression – it protects musicians and artists. It protects dance and the way you express yourself in clothing – and even your tattoos!

We also love that Discovery Park of America’s mission is to see beyond. We hope people will see beyond the political differences so evident today to celebrate the freedoms that nearly all Americans treasure. Because another of our survey findings was that 61% of Americans think the First Amendment can help bridge those divisions.

What do you know about Tennessee, anyway?

I’m glad you asked! We hosted four focus groups with community leaders and asked them about First Amendment issues they are interested in or concerned about.

What they told us was very much aligned with what we found in our national survey: People told us that speech and religion are their most essential First Amendment freedoms. But people are worried that religious freedom is threatened today, and they also feel that free speech is threatened. People feel the divisive political climate we’re living through has made it hard for people from opposing points of view to talk civilly. And people don’t trust the news media.

And we have deep Tennessee roots. John Seigenthaler, an award-winning journalist at The Tennessean and USA TODAY, a member of President John F. Kennedy’s Justice Department and a true champion of First Amendment freedoms, was the leading force for the Freedom Forum’s First Amendment work. His legacy can be seen in journalism programs across the state, from Middle Tennessee State University to Vanderbilt University. And we have offices and team members based on Vanderbilt’s campus in Nashville.

What will visitors do at the First Amendment Festival on Sept. 24?

The theme for the festival is fun, freedom and fellowship. We hope visitors will have a lot of fun celebrating the rights that make our country unique. We will have yard games like Jenga and cornhole, trivia games and a First Amendment scavenger hunt for the kids. We’ll have Fast Facts and Snacks, where people can get a cookie and a quick 5-minute download from our First Amendment educators about free speech, the forgotten First Amendment freedom and being media savvy. Folks can take a selfie with some famous First Amendment heroes in our Walk of Fame.

The big event of the day is a conversation with Fox News Channel anchor Bret Baier, who will talk about his career as a journalist and how the First Amendment supports his work. After Bret, we will have a special musical performance by the Grammy-winning Gatlin Brothers. We are really excited!

The Friday before our festival, our Freedom Forum educators will engage with local students from fifth grade on up to college on some First Amendment basics. And they’ll create a chalkboard expression about the First Amendment that will be on display for visitors to the festival the next day.

What else is the Freedom Forum up to these days?

Lots! This fall, we’re visiting three universities – the University of Georgia, Morgan State University in Maryland and the University of South Dakota – to listen and learn from students and engage with them about exercising their First Amendment rights. We know from our survey that the majority of Americans think campuses should foster free exchange of ideas, yet we’re often divided about how to do that. Our religious freedom educators have developed new shareable content and videos about how recent Supreme Court rulings relate to how students and teachers can pray in public schools. And our journalism initiatives are working to improve the culture of newsrooms across the country, and in the process, improve the news. We share First Amendment stories and artifact in museums and public spaces across the country, including exhibits open right now at Reagan and Dulles airports in Washington, D.C. We also host an annual Free Expression Awards event to honor individuals who champion free expression and the First Amendment, and inspire others with their stories.

If people want to learn more about the Freedom Forum or get more involved in championing the First Amendment, what should they do?

Where can I get a ticket for the event at Discovery Park?

The event is FREE with registration at discoveryparkofamerica.com/1AFestival.