More than 5,000 guests visited Discovery Park during the three-day Military History and Armed Forces Symposium that was held April 23-25, 2021. The event featured a variety of programs and interactive activities that explored the past, present and future of the American military. It was considered such a success that the dates of April 22 – April 24, 2022 have been selected for next year’s event.

Attendees experienced a number of special guests who participated in panel discussions and presentations on topics like women and minorities in the military, national security, and closer looks at the wars of the past including the Civil War and the Vietnam War.

Reenactors and authors of military-related books were on hand to share stories from the history of the military and Discovery Park educators led gallery talks that provided more details on several different areas of the park’s military gallery. A pop-up exhibit of portraits by early photographer Matthew Brady was unveiled and members enjoyed a free reception with entertainment by Operation Song.

For those who could not attend, below are links to some of what you missed. Be sure to save the date for the 2022 Military History and Armed Forces Symposium. 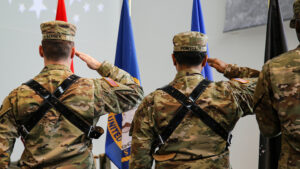 Photo Galleries from Day One 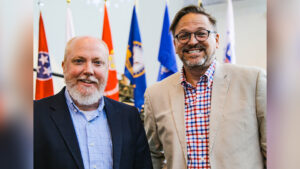 This special episode of “Reelfoot Forward: A West Tennessee Podcast” with Dr. Timothy Smith was recorded during the event. Dr. Smith was one of the featured historians on “Grant,” a three-night mini-series from The History Channel. The audience learned more about the life and career of Ulysses S. Grant and the Civil War and discovered how history-related documentaries are made. Dr. Smith also shared suggestions on getting your children interested in the past and the best historic Tennessee destinations. He is the author of more than 20 books on topics ranging from Shiloh to Champion Hill to Vicksburg to Grant.

Listen to the podcast here.

Check out his books here. 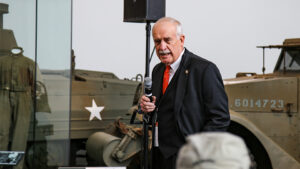 Lt. Gen. Castellaw is a 36-year veteran of the Marine Corps, where he held several commands, including chief of staff for the United States Central Command during the Iraq War. Since retirement, Castellaw has served as an advising expert in matters of national security, with emphasis on climate change. He  lives in Alamo, Tenn. and is the founder and CEO of Farmspace Systems, a company specializing in drone and aviation technology in agriculture. 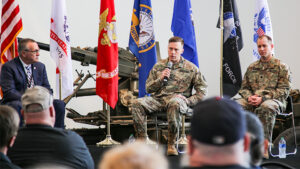 From Kuwait to Capitol Hill

Maj. Gen. William M. Maloan served as the Deputy Commander, Joint Force Headquarters, Tennessee Army National Guard since 2007, and retired in 2012. He currently serves as the Presiding Judge and Chancellor of the 27th Judicial District for Weakley and Obion Counties in Tennessee. Featured were members of the Tennessee National Guard who recently returned from serving in Washington, D.C. during the inauguration of President Joe Biden. Included were Capt. Elliott Martin, Lt. Col. Tony Glandof and 1st Lt. Brittany Allsop. 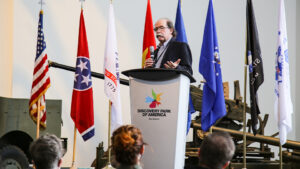 In Harm’s Way: A History of the American Military Experience

Dr. David Coffey, professor of history at the University of Tennessee at Martin, discussed his latest book, In Harm’s Way: A History of the American Military Experience that is being used now as a textbook at West Point Military Academy. 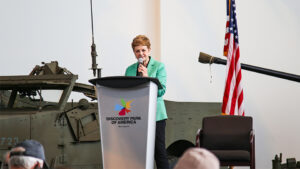 Women in the Modern Military

Cmdr. Braddock is a 24-year veteran of the U.S. Navy. Since retiring in 2004 and earning a Master of Arts degree in counseling, has worked as a licensed marital and family therapist in Jackson, Tenn. She hosted a panel discussing the experiences of women in the modern military. Included were Cmdr. Becky Walthour, U.S. Coast Guard; Cmdr. Sheree T. Williams, U.S. Navy; Corp. Carrie Mercer, U.S. Marine Corps. 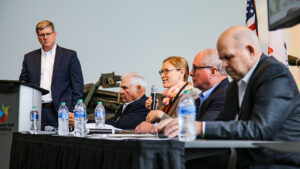 Go There: A Call to Bring Invisible Soldiers of Vietnam into View

Kent is a retiree of the Tennessee Department of Agriculture, where she most recently served as the creative resources director. She is the author of “Better Men: Alpha Upsilon in Vietnam,” in which she sheds light on the comradery of 14 fraternity brothers from Alpha Gamma Rho’s Alpha Upsilon Chapter at the University of Tennessee at Martin who became brothers in service in Vietnam between 1964 and 1972. Kent holds a degree in psychology and a master of arts degree in broadcast journalism from the University of Tennessee. In this panel, several of the servicemen who were featured in her book shared their story. Included were 1st Lt. Thomas Raines, Vietnam veteran; 1st Lt. Bill Powell, Vietnam veteran; and Col. Ed Bevill, U.S. Army retired Vietnam veteran. 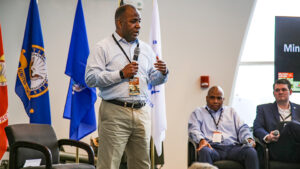 Minorities in the Military

Col. Porter is a retired Army serviceman who now serves as program director for Veterans Employed in Service Technology and Agriculture (VETSA.) Before retiring, Porter held the title of deputy chief of staff for the United States Army Human Resources Command at Fort Knox in Kentucky. He has over 30 years of experience in human resources, much of that time is the Army. He led a panel on issues and prejudices facing service members in today’s armed forces. Included were Col. Milton Thompson and Dr. Adam Wilson.

WBBJ Jackson attended the event and aired this story, and WPSD Paducah interviewed several of the guests in advance. You can find those interviews here.